Our visit to City Life/Vida Urbana was extremely productive and exciting. At the meeting was our team (Nene, Dara, Terry, Mike) and the Executive Director of CLVU – Curdina Hill. We began the conversation by reflecting on the CLVU-produced documentary video called “Communities in Peril” that Mike asked us to watch before the meeting: http://www.youtube.com/watch?v=XXxZs_pswdo. We also reviewed the CLVU blog about Yolanda Nova, the woman featured in the video who faced foreclosure and eviction and eventually won the right to stay in her home: http://clvu.marquee.by/cuando-luchamos-ganamos/ 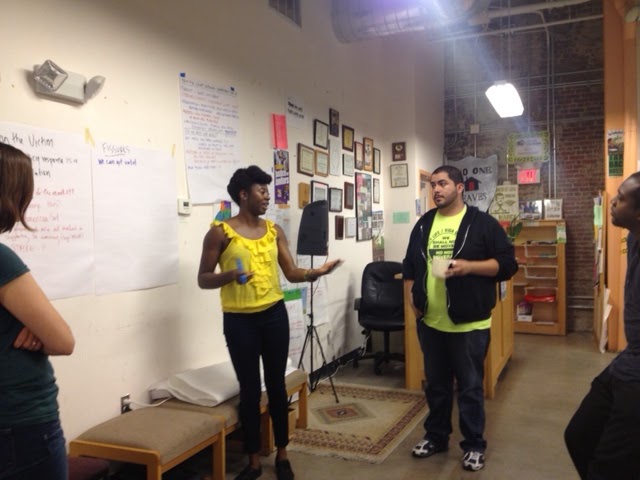 After much discussion, we decided: the story was powerful, and the message was clear; what was not clear was the overarching narrative that CLVU wanted to reiterate – that the housing crisis is not over, and the cycle of housing bubbles and crises would continue until housing is de-commodified. This is our overall project goal: to find a narrative and a project that would combine the different campaigns CLVU is working on: 1) an anti-investor campaign – many of the foreclosed properties are being bought up en masse by investors looking to sell the houses when land values rise so they can turn a profit, 2) fighting gentrification in Boston neighborhoods, and 3) a law to assert the rights of tenant to stay in their homes even if the property is foreclosed on. Although the campaigns seem only tangentially related to each other in that they deal with housing, they are all under-girded by the idea that housing is not a commodity, that people need places to live, and housing being on the speculative market causes problems for working class and low income people.

The goal of our meeting on Thursday was to leave with an agreed upon project idea, but coming up with a project to “combat the cultural narrative that the housing crisis is over” and link the work of CLVU was harder than you’d think! The task is daunting: shifting cultural narratives – both how to come up with new narratives that are broad enough to capture the core ideas of what we are fight for, and how to communicate it in a way that actually challenges the dominant narrative. And it is the task faced by every social justice group fighting for better policies and practices for people.  Terry and I used tools from the Center for Story-based Strategy to facilitate a conversation within our group about dominant narratives and cultural narratives.

We needed to link the campaigns that CL/VU is working on through one cultural narrative that is powerful enough to combat the idea that the housing crisis is over. In the They Say/We Say activity, we brainstormed narratives, assumptions, and ideas that people in power, and the status quo believe, such as market forces always work, there is no one to blame for this crisis, and people who go into foreclosure are irresponsible. We then brainstormed ideas and narratives that we believe and want to assert through our work, for example: housing is a human right, market is a human construct that can change, and people are more important than profits. 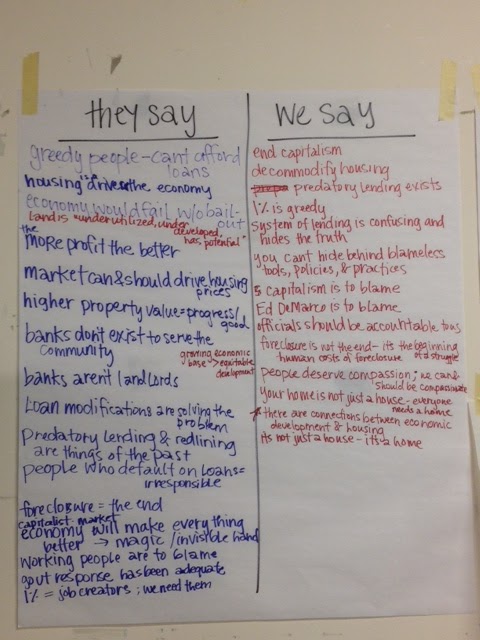 Because CLVU is currently running these campaigns, we did an activity called Points of Intervention (POI) to see how we could tie in action around the assumptions and dominant narratives to CLVU’s current actions. POI calls out four points that organized action usually happens at: the point of destruction (eviction blockade), consumption (housing auction), decision (housing court), or production (factory). 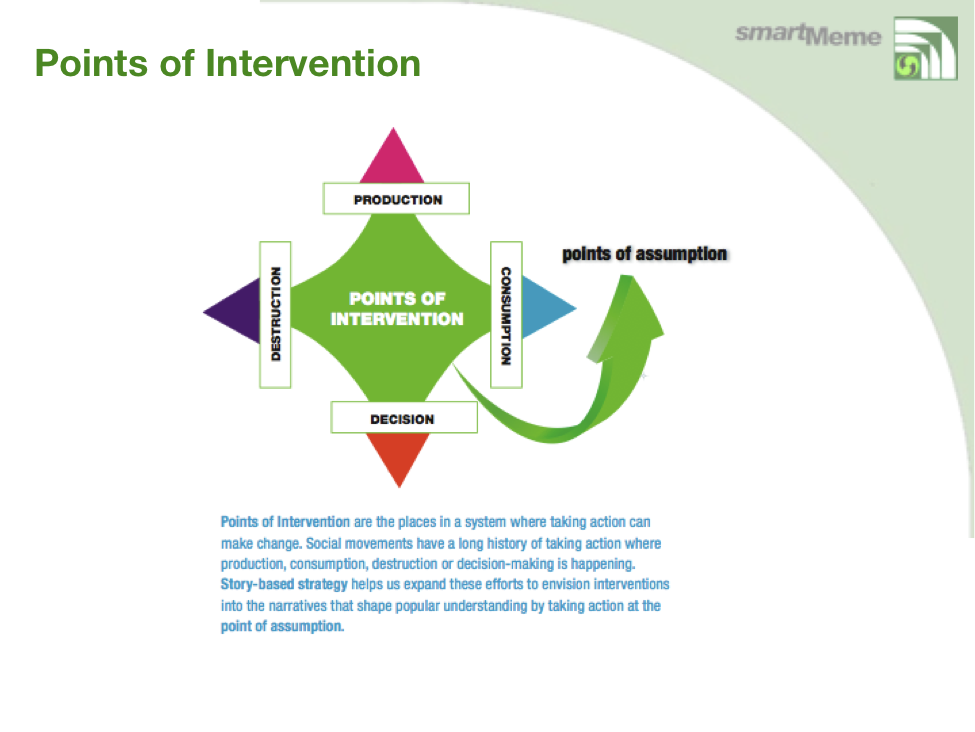 These points are usually where the problem is most visible or where the impact of the problem is most felt. It makes logical sense for actions to happen at these points – any passerbyer who sees an action at one of these points should be able to make reasonable sense of why the action is happening. There are also points of assumption – not physical places, but spaces where the narrative that keeps policies in place are not working. The Center for Story Based Strategy asserts that actions must also target points of assumption by pointing out what is invisible, reframing the debate, and create the space for alternatives. We had a lengthy discussion about the way Occupy Wall Street was able to do this.

With these brainstorms, we then attempted to synthesize our ideas by pulling out common themes as well as identifying “fissures” in the dominant narrative – areas where the narrative is weak or contradictory: for example; the dominant narrative is that market forces provide the best distribution of resources, yet it is actually the social safety need that makes market capitalism bearable for most people. 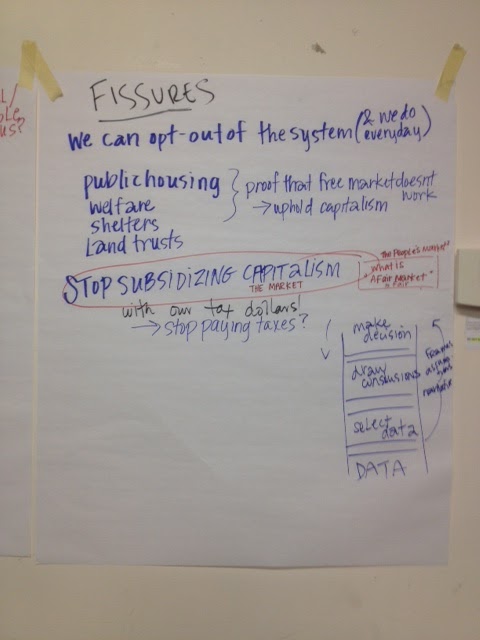 We revisited our logic model from class on Tuesday in order to start brainstorming potential outputs. Video, vines, and social media all came up as potential avenues to get the message across. 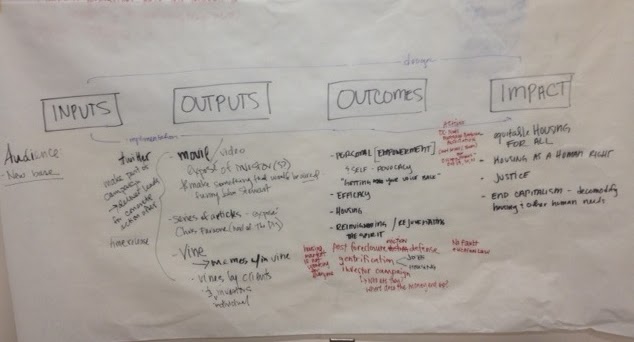 My group still has a lot of thinking to do before we decide on a course of action. Importantly, Mike is going to take our ideas back to CLVU’s organizing team. Ideally, these conversations happen together – the organizing strategy is pulled together with the narrative framework already in place. Otherwise, you get powerful pieces like Communities in Peril that amplify individual stories of actions, but don’t advance a new cultural narrative or challenge the dominant narrative that keeps communities struggling for housing and basic needs. Furthermore, without concrete, organized actions to support it, a narrative runs the risk of being ineffective and difficult to advance.

I am hopeful that we can come up with something good. Using tools to facilitate the conversation was productive and fun so I think we will continue to pull from the Center for Story Based Strategy and Terry’s newly forming civic hack lab “Intelligent Mischief” for tools and processes to have conversations like these. The major challenges we have are how to create a strategy that is culturally appropriate, that has buy in from CLVU’s organizers and membership base, that also has the cultural and strategic capacity to force a conversation about current housing policies and the ideas and ideologies that keep those policies in place – and do it all this semester – no big deal.

A student from the Zumix team in Codesign studio participates in a values-driven brainstorm workshop.

This week all the student teams visited their community partners.  We spent the first half of class sharing updates and providing feedback about the four collaborative project: Zumix, the Urbano Project, REV/ The Brazilian Immigrants Center (BIC), and City Life / Vida Urbana.