After a first round of interviews and some valuable input from Sasha and Evan, we regrouped last Thursday to discuss our progress. We realized we had started with a very broad project idea (co-everything!), which has been attempted multiple times elsewhere, and needed to narrow it down to something tractable within a semester.

The simplest (and easiest) part of the co-everything platform is the technical layer: something that connects clients to service providers and handles the transaction (for instance, scheduling and payment). We decided to focus on this aspect by working on developing a specialized platform not for “everything”, but for just one or two cooperatives. Once we’ve validated usability and built a core base of cooperatives and their clients, we can begin thinking about how to expand outward and establish a network of coops on this platform. Having recentered our project on the theory that there’s a need, both for coops and clients, for a platform to handle their transactions, we revised our business model canvas accordingly, and realized that before moving forward we needed to interview some coop clients and find out what transactions currently look like. Our updated business model canvas is available here.

In that light our team has reached out to our classmates in Restoring Roots and Vida Verde. As they’re also doing client interviews, they’ve kindly agreed to share notes and attach three of our questions to the end of their interviews:

1. How did you first hear about ____?
2. What was your first interaction with ____ like?
3. Tell me about the whole process, from first contact to transaction to completion.

We’re also in discussion with Broadway Bikes and BostonTech Collective, whom we interviewed two weeks ago, to see if they would be willing to let us observe clients in the shop and collect contact information from potential interviewees. Ideally, our full script would be:

Intro: Thank you so much for taking the time to talk with us! As we said earlier, we’re students at MIT doing some research about Boston-area cooperatives. We have a few guiding questions but this will be fairly conversational, and you should feel free to mention anything you think might be relevant.

2. What was your first interaction with ____ like?
3. Did you know ____ was a cooperative? What do you know about cooperatives?
4. Did you have any complaints about doing business with ____?
5. Do you have suggestions for how ____ can do better?
6. How long did the whole process take, from first contact to transaction to completion?
7. Have you referred anyone else to this business?

Finally, Declan was able to connect with Josh Danielson from Loconomics, a San-Francisco based project doing very similar work in platform cooperativism, but starting with the freelancer community instead of the cooperative community. Co-everything would instead start from the coop side and eventually branch out to freelancers. Josh seems open to collaboration but we will need to decide how and what kind of relationship we want to maintain, as Loconomics is already pretty far along in the app development process and are planning to release soon.

This week, Allan, Lucia, Kai, and Micky made our way to Placetailor’s office in Jamaica Plain to meet with Declan and Travis and kick off our project for the semester. We finalized a working agreement but decided to hold off on signing it until we come to a consensus about what our project will be along with its more specific details and our plan of action.  Then we went through a mind-mapping exercise to lay out the key principles we associate with cooperatives and lean UX, which motivated our brainstorming session. Here’s the result: 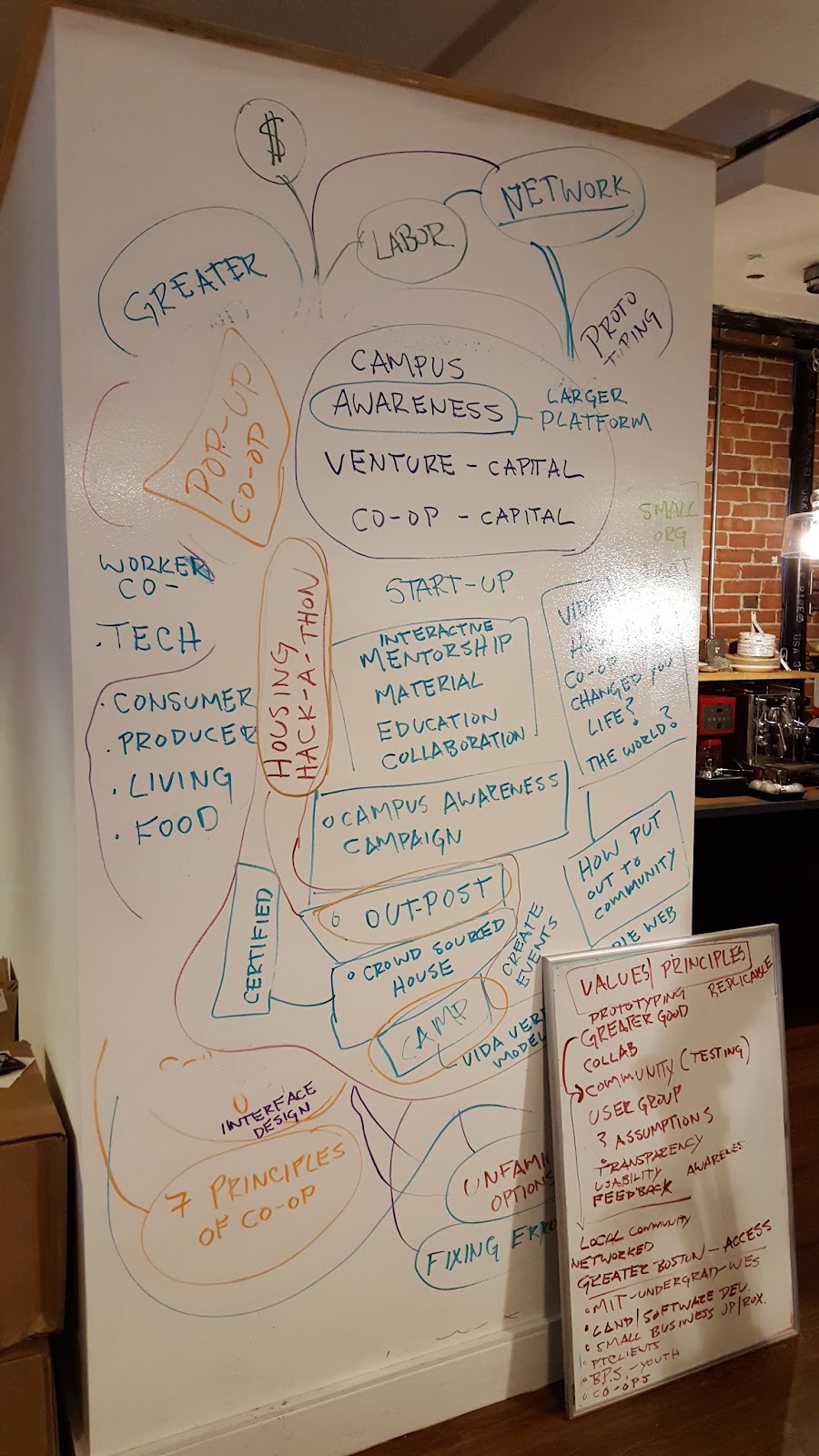 We shared a common motivation to create something for the benefit of the Boston-area community, with the possibility of scaling up or out to a broader audience. Given that motivation, and the various communities we have access to, we decided to explore three potential project directions:

As a team comprised of undergraduate students and co-op members, we’re in a position to bring awareness of co-ops to college students as opportunities for both career paths and community engagement. There is ample infrastructure for undergraduate career development in academia or industry, as well as funding and educational programs to support student innovation via the startup/venture capital track (examples include StartMIT and MIT $100K. What might it look like to educate students (via media campaign, or mentorship, or funding, or otherwise) about the benefits of cooperative labor practices?

Placetailor is successful because of two main attributes: (1) community engagement, and (2) experience. Community engagement isn’t portable or scalable; it has to happen at the local level. But it might be possible to package knowledge gained from years of experience into a “co-op kit” that another group can use to begin developing a local co-op elsewhere . This would decrease the barrier to entry for co-op creation and naturally foster a network of co-ops, all sharing knowledge and practices as they learn and grow in their own local communities.

Houses are inherently community projects, and provide locations for community needs–whether that’s shelter, a common meeting space, or any other of a multitude of ways that a building with four walls and a roof can be put to use. How might communities be more fully engaged with the process of designing and building a structure for their own needs? A “housing hackathon” (taking place in either physical or virtual space) would draw together the various minds, experiences, and needs of some community and guide that group through the process of developing and building their own infrastructure . We can imagine a living cooperative designing themselves a building that then becomes their home, or an artists’ collective creating their own makerspace/performance venue.

We had an awesome first meeting and we’re really excited for the months ahead!

I’m Allan, and I’m a first-semester junior studying Comparative Media Studies (CMS) and Aero/Astro (Course 16). I’ve just returned from a semester on leave working for Amazon’s Prime Air project, helping develop drones to deliver packages. I have broad interests but most recently I’ve been thinking about:

Not to say I necessarily have anything knowledgeable to say about these topics, but these are some things that have been on my mind and which I want to learn more about. On the side, I blog for the MIT Admissions website, where you can find an account of my past work for Credit for Reddit (CMS.400) exploring the relationship between majors and identities within MIT undergraduates. I also sing a capella with the MIT/Wellesley Toons and play a role on the MIT Design/Build/Fly remote-control aircraft team, so if you ever need anyone to help you build an airplane, I’m your guy.

I’m excited to see where our work together this semester goes; I expect to be learning a lot from all of your different backgrounds and perspectives!